Since 2015 LPF has helped protect the green macaw, which inhabits from Mexico to Argentina and whose main threat is habitat destruction.

The military macaw, Ara militaris, is listed as Vulnerable in the Unión Internacional para la Naturaleza (UICN) Red List and recent estimates indicate that the population of mature individuals is declining, mainly due to habitat loss and capture for domestic trade. In South America it inhabits humid forests and cleared areas adjacent to forested foothills. In Mexico, where the project supported by Loro Parque Fundación is being carried out, it can be found in arid and semi-arid forests, pine-oak forests, riparian forests and seasonally it can move towards dense thorny forests; it has also been reported that this species can inhabit agricultural fields and orchards.

One strategy for conservation of the military macaw could be to encourage non-extractive use of populations, for example through ecotourism, but implementing these strategies requires social and scientific basis. 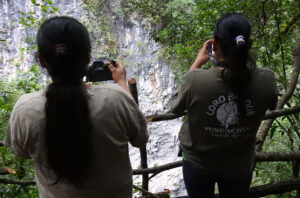 In this regard, the project supported by Loro Parque Fundación seeks to evaluate the requirements of food resources, habitats, and nesting sites of Ara militaris, as well as to understand the perception and actions of the local population towards macaw conservation, so as to generate a social and scientific basis for implementing non-extractive conservation measures that take into account the local community’s needs.

The project is carried out along the coast in three types of forests: tropical dry deciduous forest, semi-deciduous forest, and temperate pine-oak forest. In each of the three forest vegetation types, macaw counting sites have been set up and transects established to examine the life cycles (phenology) of the plants present in the macaws’ habitat. Occasional counts of macaws are made in the first 3-4 h of the morning, when the psittacines are most active and in order to study their diet, opportunistic observations are made in each type of forest and every period of the year. Where macaws are found feeding, the researchers record the date, time, habitat type, geographic coordinates, species and size (dbh – diameter at breast height) of the tree, as well as the number of macaws feeding and the part of the plant they eat (fruit pulp, seeds or flowers), and the stage of maturity of the tree (immature, mature, or dry).

As a result, significant seasonal variations have been found in the macaw’s relative abundance, being higher in the dry season, and decreasing in the rainy season. This seasonal fluctuation in macaw abundance was associated with different vegetation types. For most of the year, macaw abundance was generally higher in semi-deciduous forest compared to the other two types, with peak abundance in this forest type in the middle of the dry season, in April. 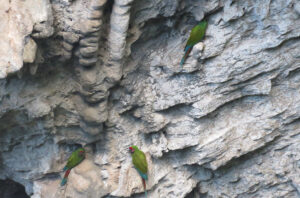 In terms of food availability, according to the phenology transects, a total of 454 trees of more than 52 species producing fruit, were recorded. Both tropical deciduous and semi-deciduous forests showed similar patterns of fruit availability throughout the year and in both types of tropical forests, the peak fruiting occurred in the dry season.

The information obtained by the project will be directly applied in forest management by local communities in macaw areas, identifying habitats and tree species for conservation. Recommendations from the study can also be incorporated into the Military Macaw Conservation Plan that is being developed in collaboration with Mexican government agencies.