The orca population in the Strait of Gibraltar is critically endangered, with only about 50 individuals, so LPF funds several projects for the study and conservation of this population.

Orcas are found in almost all the planet’s oceans. Therefore, it is a complex task to determine the global conservation status of the species. Currently, the IUCN (International Union for Conservation of Nature) states that there is insufficient data to determine the degree of threat.

Orcas are known to feed on a wide range of prey, including most species of marine mammals, seabirds, sea turtles, many species of fish (including sharks and rays) and cephalopods. They have a diverse range of foraging tactics, including intentional beaching to capture sea lions on shore, creating waves to drag seals off ice floes, and using cooperative techniques to herd fish and attack large prey such as tuna and large whales. 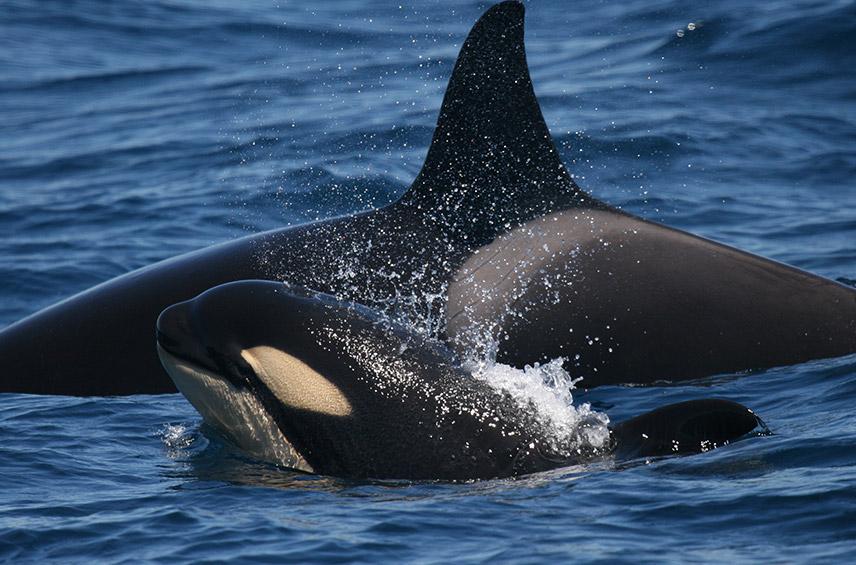 Although it is not yet possible to determine the overall conservation status of the species, we can determine the level of threat to local populations, especially those that have a limited distribution and do not migrate. This is the case of the orca population inhabiting the Strait of Gibraltar, south of the Iberian Peninsula, which is critically endangered. This unique region where the Mediterranean Sea and the Atlantic Ocean meet is the ideal habitat for orcas due to the presence of prey, in particular bluefin tuna, which is the reason why there is a permanent population in the waters of the Strait.

However, heavy maritime traffic in the region, chemical and noise pollution and overfishing of bluefin tuna threaten the conservation of these marine mammals, pushing this population to the brink of extinction. Currently the population in the Strait of Gibraltar is estimated at just over 49 specimens.

Loro Parque Fundación has collaborated with Consejo Superior de Investigaciones Científicas (CSIC) and Grupo para la Conservación, Información y Estudio sobre los Cetáceos (CIRCE) in the study of these populations, through photo-identification, tagging and satellite tracking, analysis of their diet and main threats, such as bioaccumulation of toxic substances.

One of the projects developed with the orcas in the Strait of Gibraltar is the study of energy expenditure used by the killer whales in relation to the density of prey in the Strait of Gibraltar, which will make it possible to determine the energy expenditure by the animals during hunting, and their relationship with the fishing fleet. This study is of great importance because of the relationship between food availability and orca reproduction.