The yellow-naped amazon parrot, with only 2500 specimens in the wild, is just one step away from extinction. LPF has been working to save this species since 2008.

Yellow-naped Amazon Parrot
Conservation, Protection and Monitoring of the Yellow-naped Parrot and its Habitat, in Ometepe Island Biosphere Reserve, Nicaragua.

The Yellow-naped Amazon Parrot, Amazona auropalliata, according to the IUCN is Critically Endangered and is currently in rapid decline throughout most of its range, mainly due to habitat loss and capture for local and international wildlife trade.

Its habitat includes Mexico and Central America, along the Pacific slope of the isthmus in southern Mexico (Oaxaca and Chiapas), Guatemala, El Salvador, Nicaragua and north-western Costa Rica, the Bay Islands of Honduras and the Caribbean slope in eastern Honduras and north-eastern Nicaragua. Although it is mainly found in semi-arid and semi-deciduous forests, arid scrub, savannas, mangroves, Pacific swamp forests, evergreen gallery forests and sometimes agricultural landscapes, it has also been reported that in recent years the species appears to have established populations in cities and urban parks, probably originating from escaped caged birds. The species’ diet remains poorly studied, but so far it has been found to feed on at least 48 species of food plants. 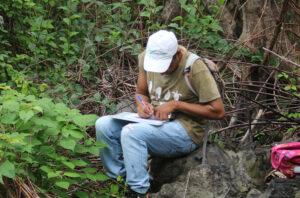 Deforestation has been a frequent threat throughout its range. Land conversion to sugar cane or rice production also threatens its habitat, especially in Nicaragua. In Mexico, less than 30 % of the original habitat remains within the species’ range.

The species is regarded as one of the most sought-after psittacines in the Central American pet trade. During the 1990s, nearly 100% of known nests in southern Guatemala were looted. Recent market surveys show that the trade has increased again since 2016 in Managua, Rivas, and other cities, despite being prohibited by law. In Costa Rica, approximately one-third of nests were raided, accounting for about 85 % of all observed failed nests. Poaching may also affect the future reproduction of the species, as removing the chicks damages the tree and as a result it can no longer be used as a nesting site. It is thought that twice as many individuals are removed from the wild as are recorded for export, based on a 54% mortality rate during capture and transit.

LPF projects aimed at protecting this endangered species date back more than a decade. This has greatly increased the knowledge of this species, as well as the implementation of more efficient protection measures. BIOMETEPE as a local organization and in alliance with other partners has been working in the Biosphere Reserve, Ometepe Island, Nicaragua, to monitor and protect yellow-naped parrots since 2018. Studies suggest that the island hosts the largest and densest remnant population of A. auropalliata in its range.

The methodology of the project supported by Loro Parque Fundación to preserve this Critically Endangered species is based on two pillars: 1. Identification of parents in time of preparation of a cavity to nest and lay their eggs and 2. Protection of nests and chicks of yellow-naped parrots, an activity led by the communities. 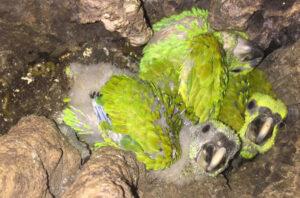 As a result, nests have been identified, monitored, and protected in six communities (Peña Inculta, Mérida, Balgue, La Palma, Pull and Las Cuchillas) of the Ometepe Island Biosphere Reserve and 293 parrot chicks have been protected, of which 233 parrots have flown free. Thanks in large part to the support of Loro Parque Fundación, this project can continue through 2022 with patrols in the 6 communities and monitoring at least 54 nests identified to date.

It is worth highlighting the importance of involving the community in conservation projects, for instance, in this project, we have continued to provide training on how to identify and protect nests, how to identify a looter in their community, how to carry out environmental activities in their communities and how to lead patrols with local authorities in nesting areas. In addition, environmental campaigns have been carried out in schools so that children turn in their slingshots (rubber bands) with which they hunt birds, and get involved in the conservation of the yellow-naped parrot.