LPF has focused on the study and conservation of this emblematic animal, which is fundamental to the balance of the forests. The projects have been mainly focused on breeding and habitat protection.

The iconic scarlet macaw Ara macao is the most widely distributed of all macaw species, which helps it remain classified as Least Concern on the IUCN Red List of Threatened Species. However, the Mesoamerican subspecies Ara macao cyanoptera, which is distributed in southern Mexico, Belize, Guatemala, Honduras, and Nicaragua, is highly threatened by poaching and habitat loss, largely caused by intentional forest fires, cattle ranching and expanding human settlements. 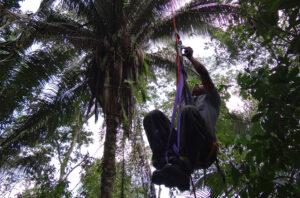 he project supported by Loro Parque Fundación has been carried out together with the Wildlife Conservation Society (WCS) and in partnership with the Guatemalan government and local communities, is focused on boosting the recovery of wild populations of Ara macao from northern Central America in Guatemala.

Some actions carried out as part of the project have included monitoring nesting and fledging rates of macaws at key nesting sites, as well as awareness-raising through environmental education involving local communities. Another strategy has been to remove the weakest chicks that usually die and take them to a station in the middle of the forest to raise them by hand and later reintroduce them into the wild in Guatemala’s Maya Biosphere Reserve. 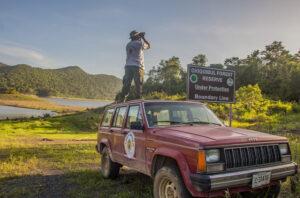 In addition, nesting shelters have been installed and natural cavities have been enlarged prior to the start of the nesting season to improve the availability of safe cavities for successful breeding. The nesting boxes have been made considering the experience of Loro Parque Fundación in parrot breeding, using a system of wide horizontal boxes that allow birds to be comfortable and clean, thus improving the results of growth and independence of chicks.

Thanks to these efforts wild populations have started to recover from a low nesting 1 chick per nest (2013) to 2 and 3 chicks (2018). This has been achieved in part to the surveillance of the nests that prevents poachers from stealing chicks. In addition, 47 chicks have been returned to the wild by 2021.