LPF’s actions have saved the Lear’s Macaw from extinction. Among the work carried out is the reintroduction into the wild of specimens born in Tenerife. 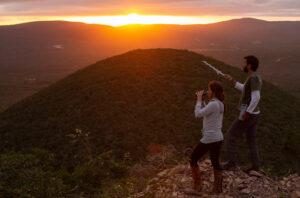 The Lear’s Macaw is endemic to north-eastern Bahia in Brazil, inhabiting the Catinga, a biome unique to Brazil that has sandstone cliffs for nesting and colonial roosting, as well as licurí palms (Syagrus coronata) whose nuts form part of their diet. This species was first scientifically identified 150 years ago from commercial birds, before a wild population was found in 1978. The species is known to breed in two colonies south of Raso da Catarina. In 1990 the population was estimated at no more than 60 individuals but surveys since then have estimated an increase in population to 1694 birds in 2018. However, it is likely that these figures include a large proportion of immature individuals as a 2010 survey found that only 20.3% were reproductively active. 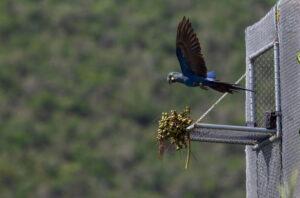 The species was listed as Critically Endangered on the IUCN Red List from 1994 to 2008, and the main causes of its population decline were attributed to habitat loss, hunting and capture for wildlife trafficking. Thanks to conservation efforts largely supported by Loro Parque Fundación, the Lear’s Macaw is now listed as Endangered.

It is estimated that the current limiting factor for the species’ recovery is the reduction of food resources, especially the licurí. This is due to habitat destruction caused by fires carried out to clear the land and then use it for cattle fodder and maize, beans, and cassava or yucca crops.

One of the main actions carried out by Loro Parque Fundación has been the reintroduction of Lear’s macaws bred in Tenerife. Nine specimens of the endangered Lear’s Macaw, born and bred in Tenerife, were sent to their home country, Brazil, to be socialised with other macaws and later released. This is the most significant repatriation of this endangered macaw to Brazil, occurring after ten years of Loro Parque Fundación’s involvement in the international protection programme for the species and thanks to the successful work at its breeding station. 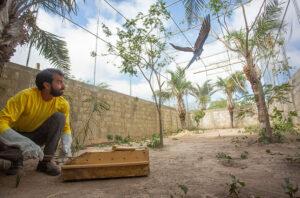 LPF is also currently supporting a programme to compensate farmers for damages to their maize crops caused by Lear’s Macaws. For this programme, thanks to the support of the Loro Parque Fundación, maize plantations where macaws feed have been quantified, geo-referenced and measured, and the actual damage to plantations has been assessed and quantified in order to compensate farmers for their losses.

In 2022, the first chick was born to a pair of Lear’s macaws born and raised at Loro Parque Fundación and reintroduced in 2019 in the Brazilian caatinga. Undoubtedly, a real milestone for the conservation of this species, and for all conservation and ex situ breeding programmes.