Through 5 projects since 2005, LPF has contributed to the conservation of the Amazona vinacea. An endangered species with less than 3000 individuals left in the wild.

Amazona vinacea has become a rare species despite its widespread distribution. In the early 1980s, Paraguay was considered the world’s stronghold, but today all subpopulations in Canindeyú, Alto Paraná and Caaguazú have fewer than 200 birds. The Vinaceous Parrot is perhaps most common in southern Brazil, with an estimated total of 1,500-2,000 birds. In Argentina, few populations remain in Misiones province, and the species’ stronghold is the mosaic of small farms and forest remnants. A 2016 census of all reported localities in Argentina, except Campo Viera, yielded between 262 and 314 individuals, and Campo Viera is estimated to have fewer than 20 individuals. Availability of nesting sites continues to decline in Argentina due to forest clearing. A recent regional census, conducted simultaneously in Brazil, Argentina, and Paraguay, showed a total similar to that observed during the previous project in 2013-2014, but lower than that found in 2007. 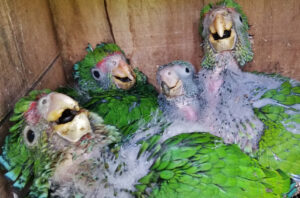 This species is listed on the IUCN Red List as Endangered due to recent population estimates indicating that the global population is very small and has been in rapid decline due to extensive habitat loss and fragmentation, exacerbated by wildlife trade, and rapid declines are expected to continue. Information is urgently needed on whether any Brazilian subpopulations exceed 250 individuals.

Amazona vinacea inhabits the Atlantic rainforest from the lowlands up to 2,000 m and inhabits the ecotones (natural transition zone between two different and adjacent ecological systems) between this forest and grasslands. Diet-wise, there is a strong association with Araucaria angustifolia in Rio Grande do Sul, but also some populations of the Vinaceous-breasted Parrot consume many other food sources, including seeds of several native and exotic species, even in areas with Araucaria forests. It nests from September to January in cavities of various tree species. During breeding season, it is found in pairs or small groups and after breeding season (February to July), the species gathers in large groups sharing roosting areas. 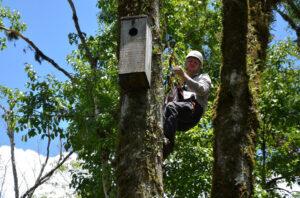 Since 2005 and through 5 projects, Loro Parque Fundación (LPF) has contributed to the conservation of the Amazona vinacea. The results of these conservation efforts have been highly encouraging. In the late 1990s, BirdLife International estimated the population of A. vinacea to be between 2,500 and 3,500 individuals, and through conservation actions the population has gradually increased every year, with the 2015 census revealing a record population of 9,176 individuals. Loro Parque Fundación supported the Curitiba Natural History Museum project in Brazil to carry out the annual counts, which in the most recent decade have been continued by the Wildlife Research and Environmental Education Society (SPVS – Sociedade de Pesquisa em Vida Selvagem e Educação Ambiental). The partnership between LPF and SPVS not only monitors the census population but also promotes protection of Amazona vinacea breeding sites and awareness of residents and visitors about the species and habitat.

Some specific actions LPF has collaborated with include the installation of nest boxes made of PVC, as the typical wooden boxes were quickly decomposing due to the habitat’s high humidity. Also, in cooperation with the Waita research and conservation institute in Brazil, several vinaceous-breasted parrots have been rehabilitated and reintroduced into their natural habitat; and great efforts have been made to raise awareness of the species conservation project among the local population through various environmental education activities.