LPF has collaborated in the study of the Swift Parrot, a critically endangered species in Australia, aiming to increase scientific knowledge to save this parrot.

The swift Parrot is a small migratory bird that feeds on nectar from the variable and ephemeral eucalyptus flower. It is distributed throughout southern Australia and flies over the sea to nest in the forests on the east coast of the island of Tasmania and other nearby small islands.

It is now listed as Critically Endangered by the IUCN (International Union for Conservation of Nature) due to the continuous decline of its population, which currently numbers between 1,000 and 2,500 individuals in the wild. This population reduction is due to habitat loss, both at breeding and migration sites. 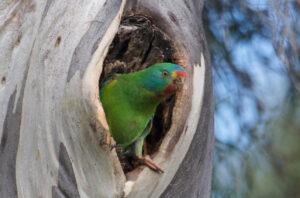 When the migrant parrot breeds, it is almost always around the flowering of blue eucalyptus and marsh eucalyptus in south-eastern Tasmania. Therefore, any disruption to flowering patterns or loss of this habitat can severely affect this species.

Swift parrots can travel up to 5,000 km from their breeding range in Tasmania to their wintering areas on the Australian mainland, making their migration the longest undertaken by any parrot in the world.

n 2010 Loro Parque Fundación initiated a project investigating the breeding biology and migratory behaviour of this parrot, to obtain essential information for the conservation of this critically endangered species. 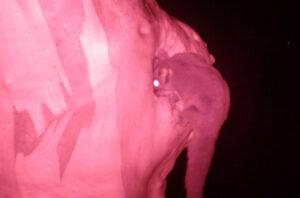 Surprisingly, it was found that the main threat faced by this species is predation by the sugar glider (Petaurus breviceps), a small nocturnal marsupial mammal endemic to Australia and New Zealand but introduced in Tasmania during the 19th century. Swift parrots are able to ward off most egg thieves, such as birds of prey, by choosing small entrances to their nest holes. However, camera traps have shown how the sugar glider preys voraciously on the nests of swift parrots, in most cases resulting in the death of the female as well as the eggs. Researchers have been able to determine that the nest success rate is 80% lower in Tasmanian populations where there is predation by the sugar glider than on nearby small islands where this predator has not been detected.

Introduced predators are a serious threat to native species around the world, as they have no strategies to defend themselves against new threats. The swift Parrot seems to have fallen into what is known as an ecological trap, for although there are other places where blue and swamp eucalyptus flourish, the swift parrot population clearly prefers to nest in places where there is more flowering, even if these areas are overrun by predators.

Future conservation actions for the migratory parrot are focused on managing introduced predators to determine the survival prospects of adult females and the incubation success.

In turn, the use of new technologies will improve the study of migration and nesting patterns. This project uses for the first time Unmanned Aerial Vehicles (UAVs), which will allow migratory birds to be tracked over long distances, in a more cost-effective and flexible way.