African Grey Parrots are in danger of extinction and their numbers are declining. Since 2000 LPF has been collaborating in the conservation of this species through 5 projects.

The African Grey Parrot is an endangered species inhabiting Central Africa, whose wild populations are in daily decline. The African Grey Parrot is one of the most popular pet birds in Europe, the United States, and the Middle East, due to its longevity and exceptional ability to mimic human sounds and speech. Because of its popularity, a major threat to this parrot in the wild is illegal capture for trade. Between 1982 and 2001 more than 1.3 million wild-caught individuals appeared in international trade, and with pre-trade mortality ranging from 30 to 66%, it is estimated that the number of wild-caught birds may be much higher. 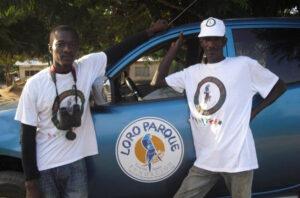 Trade in the African Grey Parrot has now been reduced, partly due to trade restrictions, but also because of the decline of wild populations. Deforestation is also negatively affecting natural populations, especially in Ghana, and the reduction in the amount of suitable nesting trees where parrots nest in hollows inside tree trunks, can be particularly detrimental.

Loro Parque Fundación has collaborated in several projects throughout its history involved in the protection and conservation of the African Grey Parrot in various countries, especially Ghana and Cameroon. Among the most interesting projects carried out with this parrot are those aimed at raising awareness and sensitising local populations. Through actions focused on schools, the goal has been to increase local and national visibility of African Grey Parrots and their importance in the ecosystem, as well as to reinforce the interest and sense of belonging of young people in the area towards birds through bird-watching excursions, art competitions for local schools and even a parrot football cup. On the other hand, conservation efforts have been boosted by improving the capacities of local forestry staff and volunteers for effective law enforcement.

Other projects promoted by the Loro Parque Fundación have been focused on research into the ecology, biology, distribution, and population status of the African Grey Parrot. These studies are essential to create real and effective conservation plans to save wild populations of this magnificent bird.

The African Grey Parrot is a great example of the importance of conservation breeding under responsible human care. The high level of interest in the parrot as a pet makes it essential to meet market demand for responsibly bred birds to reduce the enormous pressure of illegal capture and trafficking on wild populations.