LPF has managed to save the Grey-breasted Parakeet from extinction, thanks to its upward population trend, we hope to continue improving the species’ conservation status.

The IUCN Endangered grey-breasted parakeet (Pyrrhura griseipectus) has a historical range of 15 localities in Brazil but is currently found in only three areas in the state of Ceará: the Serra do Baturité, Quixadá and Ibaretama. The forests of Serra do Baturité have been greatly reduced to accommodate coffee and in 1996 only 13% of the forest remained. However, data from the last 10 years indicate that both the size of observed groups and the area occupied by the species in the Baturité Mountains are slowly increasing, probably because of intensive conservation management and education campaigns. 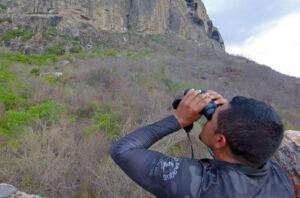 The Grey-breasted Parakeet Project was created in 2007, with the support of Loro Parque Fundación (LPF), Chester Zoo and ZGAP (Zoological Society for the Conservation of Species and Populations), especially to save this bird from extinction. Preliminary results have shown that the cause of population decline of great-breasted parakeets was due to poaching and habitat loss (nesting sites). The first breeding success in nest boxes was achieved in April 2010, and since then, the number of occupied nest boxes has increased every year. In eleven years, more than fifteen hundred chicks emerged from the nest boxes, making it one of the most successful short-term nest box programs.

Since the number of individuals in P. griseipectus populations remains low in the wild, specimens from the captive breeding program may offer a great opportunity to take the necessary actions for the conservation of this species, including reintroduction initiatives. Any decision involving the management of individuals and reintroduction must be made with great care, aiming to preserve genetic diversity, and avoiding the introduction of less adapted alleles (each of the versions in which the same gene can manifest itself) and focusing on choosing individuals with greater chances of survival. The biggest obstacle to implement these actions today is the lack of knowledge about genetic composition of natural populations and genetic variability of individuals. 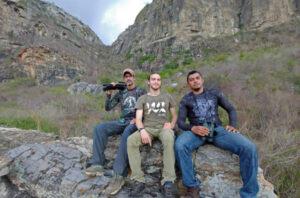 Therefore, Loro Parque Fundación supports a genetic study of the two known populations of P. griseipectus and a diagnosis of genetic divergence (process by which two or more populations of an ancestral species accumulate independent genetic changes over time, often leading to reproductive isolation) between this species and its related species P. leucotis. This divergence is very important for the conservation of P. griseipectus, as historically these two taxa have been treated as a single species. This taxonomic confusion is of concern because it may have caused the two species to be kept together in captivity, which could result in hybridization that would be detrimental to natural populations.

The project aims to obtain relevant information for decision-making related to individual selection for captive breeding programs. It focuses on developing tools to choose individuals with the lowest proportion of admixture in their genomes and to determine from which population they may come from. With this framework it would be possible to indicate which individuals should be recommended for breeding programs and where they should be reintroduced if that is the case.