LPF is undertaking an initiative to determine the status of the last remaining populations of the Atlantic humpback dolphin in Senegal. A dolphin species that is critically endangered.

The Atlantic humpback dolphin is one of the most endangered cetacean species on the planet, regarded as Critically Endangered by the IUCN, the latest studies on its abundance estimate its population at around 1,500 specimens. 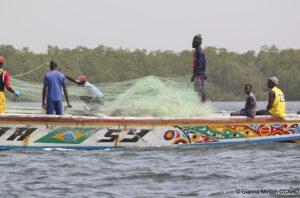 This dolphin has very specific habitat requirements, which limits its resilience and ability to escape environmental and anthropogenic stressors. This species is exclusively found in shallow waters less than 30 m deep near the coast. Preferred habitats are usually strongly influenced by tides and include areas of sandbars, deltas, estuaries, and mangrove systems.

The fact that this species’ habitat is in the coastal region greatly increases its vulnerability to many human-induced threats. The fisheries within its range are extensive and constitute an important source of income and food for the local population.

Loro Parque Fundación collaborates in Senegal with the Consortium for the Conservation of the Atlantic Humpback Dolphin, CCAHD, conducting field studies that include photo-identification and acoustic surveys, to better understand the distribution, abundance, habitat use and some aspects of the biology and behaviour of the species. Also, LPF helps in the study of local coastal fisheries to understand how they affect humpback dolphin populations, since it is not uncommon for them to be trapped by fishing nets. It is also very important to educate and raise awareness among local populations to encourage support for conservation strategies. jo de educación y sensibilización a las poblaciones locales para fomentar el apoyo a las estrategias de conservación.