The Yellow-shouldered Amazon Parrot, endemic to Venezuela and Colombia, is the 4th most endangered bird in Venezuela. LPF has been working to protect its populations and habitats since 2004.

The Yellow-shouldered Amazon Parrot Amazona barbadensis is the only species of its genus adapted to arid zones. According to the IUCN it is listed as Near Threatened. It inhabits xerophytic vegetation, frequenting dry desert scrub dominated by cacti and low thorny shrubs or trees. Nesting takes place in tree cavities, cacti, or cliffs. The average clutch size is 3.38 eggs per nest and most eggs survive to hatch. It is only found in four small localities on the Venezuelan coast and on the islands of Margarita, La Blanquilla and Bonaire. The only population under protection is on the Macanao Peninsula on Margarita Island, where 650 parrots survived in 1989. For almost ten years, Loro Parque Fundación has collaborated with Provita of Venezuela in various activities to protect the yellow-shouldered amazon parrot. As a result of these inter-institutional efforts and the support of local communities, the wild population of parrots has increased to more than 1,600 individuals. 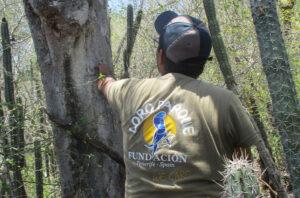 Every year between March and August, yellow-shouldered parrots raise their chicks in Macanao. Also, every year looters and bird traffickers take these chicks out of their nests to supply the illegal pet trade. To stop this traffic that threatens the Regional Bird of Nueva Esparta State, every year a team of conservationists is dedicated to protecting parrots’ nests located in La Chica creek, their main breeding area. The vigilance is an arduous and dangerous 24-hour daily task, carried out by local youths grouped in the EcoGuardianes Cooperative, under the direction of Provita. This surveillance is supported by the Municipal Police of Peninsula de Macanao, the National Guard Command of Boca del Rio, the Mayor’s Office of Peninsula de Macanao and the Ministry of People’s Power for the Environment of Nueva Esparta State, among other institutions.

Since it has been recorded that up to more than 95% of all nests can be plundered, Provita is working with local schoolteachers to provide environmental education, with a special focus on the yellow-shouldered parrot and its importance on Margarita Island. A new book, “Teacher’s Guide: Conservation of the Yellow-shouldered Parrot” has been issued. School children are already somewhat familiar with the concept of its protection, having seen or participated in the Yellow-shouldered Parrot Festival, which for 22 years has been an important tool for Provita to integrate into the local community. In addition, reforestation activities have been carried out, with a total of 200 volunteers participating and 650 trees planted.