In addition to Colombia, LPF has also worked to protect yellow-eared parrot populations in Ecuador. Thus, saving this species from extinction.

According to the IUCN the Yellow-eared Parrot is classified as Vulnerable because of the small population of recorded adult specimens. Ognorhynchus icterotis formerly inhabited the three Andean Mountain ranges of Colombia, from northern Santander and Antioquia to Nariño and in north-western Ecuador, south to Cotopaxi. It now survives in the central Andes of Colombia but is potentially extinct in Ecuador. When it was rediscovered in Colombia in 1999, it was estimated that there were only 81 birds, but intensive conservation actions have since resulted in a rapid population recovery with at least 1000 adult specimens by 2019.

The main factors behind the historical decline of the species are habitat loss and hunting. Habitat loss resulted in a lack of nesting sites, as a vast number of palm trees were cut down each year for Palm Sunday processions (a Catholic religious celebration) while dead wax palms were felled to be used as durable fence posts. Wax palms are very long-lived and slow-growing; mature specimens are more than 500 years old. Another threat is hunting, as the species is easily accessible. Hunting for food was prolific in Ecuador. 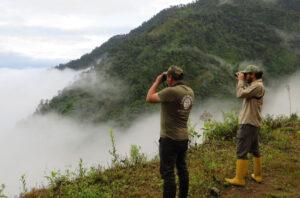 The remarkable recovery of the species is the result of an intense two-decade multifaceted conservation effort by Fundación ProAves, with the support of Fundación Loro Parque. This species was listed as Critically Endangered (IUCN) and is now listed as Vulnerable. The results of habitat protection and restoration, provision of artificial nesting sites, community outreach efforts, a national Palm Sunday campaign (“Reconciling with Nature”) to protect the wax palm, community workshops, and other activities immediately alleviated threats and sparked population recovery.

Awareness campaigns highlight the importance of wax palms and the species. These campaigns prompted people to stop hunting the parrot and cutting down palm trees, and in 2003 the leader of the Catholic Church in Colombia overturned a two-century-old tradition of using wax palm fronds in Palm Sunday processions with an immediate and effective national ban on the use of wax palms. Police, armed forces, and regional environmental agencies in Colombia carried out nationwide controls to confiscate wax palm fronds. Actions such as fencing off breeding sites to allow wax palms to regenerate, habitat restoration and the provision of artificial nest boxes led to a significant increase in the wax palm population. Fundación ProAves with support from Loro Parque Fundación has two reserves where conservation efforts are focused on this species. In 2009, Fundación ProAves established a corridor of more than 6600 ha for Ognorhynchus icterotis and other threatened parrots in the Cordillera Central of Colombia.