LPF’s conservation work with the Blue-throated Macaw dates to 1995. With just over 300 birds in the wild, we will continue to fight to save them from extinction. 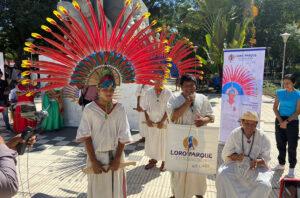 The Blue-throated macaw, Ara glaucogularis, is a Bolivian endemic species that lives only in the Moxos Plains, one of the two ecoregions of the Beni pampas. This ecoregion in northern Bolivia is one of the largest grassland floodplains in South America. There, the Blue-throated macaw inhabits remaining palm forests and gallery forests, where it feeds mainly on the fruit of the Motacú palm (Attalea phalerata) and nests in tree hollows during rainy season (November to March). The macaw’s suitable habitat extends over an area of approximately 80,000 km2. The species is found mainly in pairs during breeding season, but becomes more gregarious during dry season, especially at communal roosting and feeding sites.

Ara glaucogularis is considered by Birdlife International to be one of the world’s most endangered species and is listed by the IUCN as Critically Endangered. One of the main factors affecting this species has been lack of potential nesting sites and inter-species competition with the more common and numerous blue-and-yellow macaw Ara ararauna. Both macaws share the same habitat, including large nesting cavities, which are scarce, especially given the human impact in the Moxos plains of Beni over the last 100 years, where most large deciduous trees have been cut down. 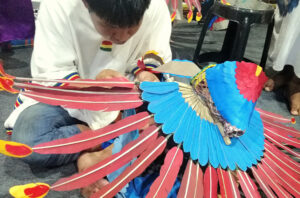 In the past, the species was severely threatened by legal and illegal exploitation for national and international bird trade, although it has been radically reduced since 1984, illegal poaching is known to still occur.

Loro Parque Fundación’s conservation work with the Blue-throated macaw dates to 1995. With just over 300 individuals in the wild, we have been striving for decades to save them from extinction. For example, the first systematic survey was conducted in August 2015 to obtain reliable estimates of global population size using simultaneous surveys in each of the three separate regions with records of the species’ occurrence. The results of the survey generated the basis for population monitoring and estimates of future population trends. The information produced by this project also highlighted that the risk of inbreeding within the increasingly fragmented population is resulting in reduced fertility. 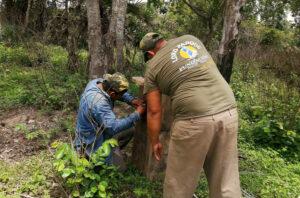 The Blue-throated macaw conservation program was also created with the support of Asociación Civil Armonía (BirdLife International in Bolivia) and Loro Parque Fundación. As part of the project and with the endorsement of the Government of Bolivia, the alliance developed the Recovery Plan for the species. Another action to promote the conservation of A. glaucogularis has been the installation of nest boxes, and with the support of Bird Endowment, the nest adoption program has been created. This program consists of different people or organizations adopting a nest box each year and the support of the institutions covers the construction and maintenance of the nests, staff costs, travel, and the monitoring program in the southern population of Blue-throated macaws. It is worth mentioning that in addition, Loro Parque Fundación keeps and breeds A. glaucogularis within the European Endangered Species Program (EEP) and has successfully bred almost 300 A. glaucogularis.

Loro Parque Fundación’s most recent efforts include devising an effective method of counting A. glaucogularis to produce an accurate estimate of the Blue-throated macaw population, but also valuable information on movements, habitat associations and other aspects of the species’ ecology.