Since 2008, thanks to LPF’s work in Peru, we have been able to save the Blue-headed macaw from extinction.

Blue-headed macaw
Conservation status of the Grey-cheeked Parakeet (Brotogeris pyrrhopterus) in Peru and Ecuador and the Blue-headed Macaw (Primolius couloni) in Peru.

Primolius couloni is a medium-sized bird found in eastern Peru, far western Brazil, and north-western Bolivia. It lives on the edge of moist evergreen forest, along rivers and on the edges of forest clearings, in some localities even near human settlements. In flooded forests it prefers habitats with Mauritia flexuosa palms. It is mainly a lowland species, found up to 1,550 m altitude. Its occurrence throughout its geographic distribution seems to vary considerably, being common in some localities and scarce or absent in others, and seasonal in some and resident in others. This variability has made it difficult to make any precise estimate of its population size and has led it to be considered a rare species. 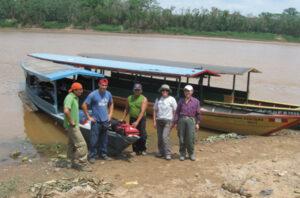 It is certainly a species that could face threats. It can be found in Brazilian markets, being valuable and in high demand because it is rare. International trade is low but apparently increasing, with three specimens in 1993 but 55 birds in 2000. Of the 150 traded birds recorded during this period, up to 50 were recorded as illegally traded. Like other macaw species, it has a relatively low reproductive rate and illegal collection poses a major threat. Much of the forest within its geographic range is still intact, but mining and gas extraction continue, as does the expansion of timber industry.

The Blue-headed macaw went from being classified as Endangered in 2003 to Vulnerable in 2010 (IUCN Red List), thanks to the actions of Loro Parque Fundación in collaboration with local Peruvian entities. However, pressure from species trafficking has increased in recent years and updated information on its population and the rate at which it is declining is urgently needed.

Loro Parque Fundación (LPF) in 2008 signed an agreement with the Government of Peru to study the species in the country, where it appears to have the largest population. The collaboration is between LPF and SERNANP (Servicio Nacional de Áreas Naturales Protegidas del Estado) and aims to define methods to determine population density at key sites, levels of illegal trade and to promote local awareness of illegal bird trafficking. Conservation efforts for this macaw species are in line with the recommendations of the CITES Management Authority of Spain.

As a first step, a review of all the results of the studies that researchers have conducted on this species in the last ten years was carried out. Records of protected natural areas have also been analysed to help determine its distribution in Peru, and the characteristics of its habitat and diet have been studied.

In addition, as a fundamental part of planning conservation actions, we sought to determine estimates of its abundance, reproductive characteristics, main threats to its conservation inside and outside protected areas, and finally, conservation status.

Some of the project’s results show that the main threats reported by SERNANP are illegal capture of macaws for sale as pets and migratory agriculture. Another important set of threats is the cutting of trees where macaws nest to remove the chicks, collect fruits or sell the wood, and particularly in the Amarakaeri Communal Reserve, there have been reports of the capture of P. couloni to exploit their feathers.
There is still much to learn about this enigmatic macaw, but through this project we are gradually obtaining all necessary information to define its status in the wild and apply appropriate conservation measures.