LPF has been working since 2003 to learn about and protect the Fuertes’s Parrot, an endangered species of the Andes region with less than 400 specimens in the wild.

Hapalopsittaca fuertesii, listed as Endangered by the IUCN, has a very restricted range on the western slopes of the central Andes of Colombia in the departments of Quindío, Risaralda, and Tolima, inhabiting Andean Forest at 2600-3800 m altitude, but mainly at 2900-3150 m altitude. Fuertes’s Parrot is restricted to mature montane cloud forest but is sometimes seen at forest edges or in transformed habitats. Often found in pairs or in groups of up to 10 individuals, it is described as inconspicuous, not very vocal. It breeds in tree cavities, nesting from January to May, and post-hatching care is biparental. 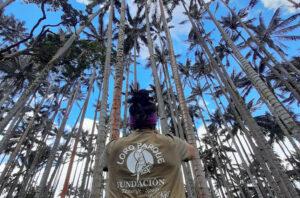 The main threat to the species is loss of forest to cattle grazing and selective logging for timber and firewood. Most mature trees with natural cavities have been felled, creating a shortage of natural nesting sites, and it is estimated that the species has lost almost 50% of its original habitat. Although a large gold reserve was discovered near a key population, the threat of deforestation was mitigated when the ProAves Foundation with which Loro Parque Fundación collaborates bought and protected 294 ha of critical habitat for this species.

Conservation efforts that have included habitat protection, provision of artificial nest boxes and awareness-raising work with the local community through environmental education workshops in schools, together with the initiative to declare the bird as the emblematic bird of the municipality of Risaralda, have led to an improvement in the status of this species, however continued conservation efforts are needed.