Through 3 projects in Ecuador and since 2002, LPF has worked on the conservation and study of El Oro Parakeet. There are less than 900 specimens of this Ecuadorian endemic species in the wild.

Pyrrhura orcesi is listed as Endangered (IUCN) and is found on western slopes of the Andes in southwestern Ecuador (El Oro and Azuay). It is apparently confined to an area of only 100 km from north to south, and a maximum of 5-10 km wide in a highly fragmented habitat and with a population estimated at less than 1,000 individuals. About 50% of the world population is found in and around the Buenaventura Reserve in El Oro province, with additional populations in Azuay province. El Oro parakeet inhabits very humid tropical forests and is mostly found between 800 and 1300m and occasionally as low as 300m and as high as 1800m. It can be observed mainly in groups of 4-15 individuals, although a flock of 60 individuals has occasionally been observed. It feeds on various fruits including the fruits and flowers of Cecropia (Yarumo). Breeding season is from November to March and seasonal movements to lower altitude forests in Buenaventura have been reported. 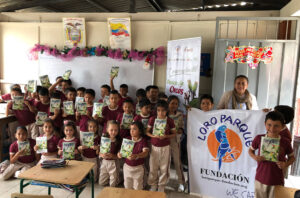 Loro Parque Fundación collaborates with Fundación Ecuatoriana Jocotoco to increase El Oro Parakeet populations through the provision of nest boxes and the creation of an ecological corridor with an area to be defined according to data collected over 10 years through the project on the concurrence of El Oro Parakeets in different sites and habitats.

The data collected by the project includes daily encounter rates of El Oro Parakeets in four important areas of the Buenaventura Reserve and measurements in other forest fragments outside the Reserve to identify the most important areas for the creation of the corridor. In addition to biological information, it is critical to identify all potential interested parties in establishing an ecological corridor and to understand the participation expectations. The intention is to hold a series of workshops bringing together these key figures from various communities. 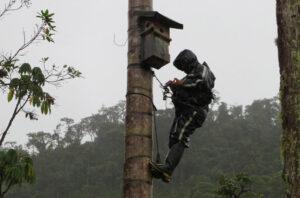 So far, 64 nest boxes have also been installed and quarantine enclosures have been built at Arenillas Zoo. In these quarantine enclosures, birds arriving at Arenillas Zoo are received, separated from the rest of the animals for the first three months, where they are checked for diseases and parasites, and placed under observation. When birds have passed quarantine and are found to be in good health, they are taken to the pre-release enclosures in the Buenaventura reserve where a process of pre-adaptation of the birds is followed, where, for example, their diet is slowly changed to natural fruits obtained from the surrounding forest. Once they are deemed to have successfully pre-adapted, each parakeet is fitted with a microchip and a leg band to track them if they are trapped again for illegal wildlife trafficking.

All these conservation efforts are coupled with awareness campaigns in both schools and local communities, as well as the acquisition and management of key natural areas to protect this endangered parrot species.