This macaw species is critically endangered, with under 1000 specimens in the wild and a trend towards extinction.

The green macaw Ara ambiguus is an Endangered species (IUCN) with a discontinuous geographic distribution across Honduras, Nicaragua, Costa Rica, Ecuador, Panama, and north-western Colombia. The total population is suspected to be lower due to the extent of habitat destruction and capture for illegal trade. Forests in northern Costa Rica and south-eastern Nicaragua have been rapidly and intensively cleared, the original vegetation is being transformed for agriculture, plantations, cattle ranching and logging, and in Costa Rica pineapple plantations are rapidly expanding and replacing tropical forest habitat, resulting in an increasing reduction and isolation of forest fragments, which seriously threatens the biodiversity of all unique ecosystems of this region. 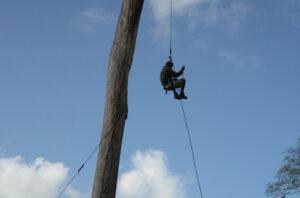 Ara ambiguus macaws make an annual migration outside the breeding season from lowland breeding habitat to higher altitude forests in northern Costa Rica or to the Indio-Maíz Biological Reserve in Nicaragua. The lowland rainforest ecosystem in the region is characterized by a high density of mountain almond (Dipteryx panamensis) and serves as habitat for the green macaw along with more than 200 other endangered species. Ara ambiguus depends on the huge almond trees both for nesting and as a primary food source. In Costa Rica, the almond forest, and consequently the macaw, is currently limited to the El Castillo – San Juan – La Selva Binational Biological Corridor, which extends into Nicaragua.

Pairs of A. ambiguus usually produce only 1 to 2 chicks per breeding season. The population in northern Costa Rica and southern Nicaragua numbered less than 200 individuals in 2019, equivalent to 130 mature individuals.